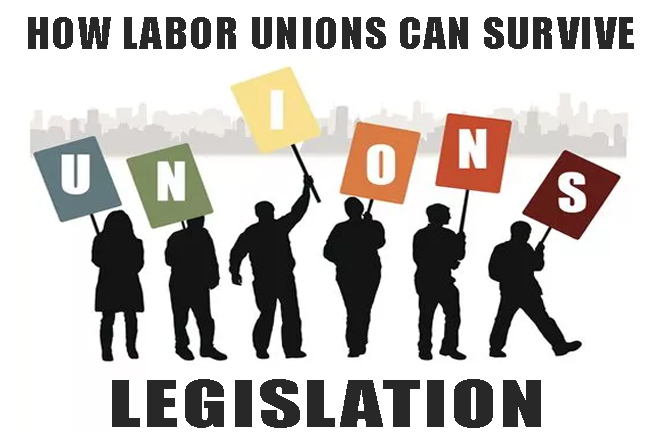 By pursuing legislation advancing the rights of all workers, unions would further their interests in two ways. They would demonstrate a commitment to all employees, which would enhance their public image and increase the likelihood that workers traditionally opposed to unionization might reconsider their position.

At the same time, they would reduce the diseconomies associated with unionization by extending to nonunion firms the same benefits available to union companies. This offer would make it less likely that nonunion corporations would work as hard to combat organizing campaigns.

Both organized and unorganized employees are increasingly affected by automation, subcontracting, and job relocations. Only the most powerful labor organizations can protect member interests through the bargaining process. Unions would be more efficient seeking appropriate protections through the legislative process. Through this venue, they could seek laws that would establish retraining and relocation funds, similar to unemployment compensation plans, that would provide employees with portable rights based on their previous attachment to the labor force. Displaced individuals would be able to use these financial resources to learn new skills or to relocate to geographic areas with greater employment opportunities, or both. Legislation could also require severance pay for displaced workers who are unable to obtain other positions with their current employer.

Unions could also appeal to labor force members by addressing issues of employee dignity. Legislation requiring employer- or government sponsored child care, job sharing, and flex-time programs would benefit parents with younger children. Increasing numbers of single-parent and dual-income families would consider such programs essential; yet most employers have been unwilling or unable to provide them unilaterally. Legislation could also mandate job sharing in lieu of layoffs during shortterm economic recessions as a means of protecting the job opportunities of more workers. By requiring firms to reduce the weekly hours of full-time personnel to thirty or thirty-five, a greater number of people would be able to retain their jobs.

Labor leaders should continue to support comprehensive health insurance coverage for all Americans. Approximately forty million individuals currently lack basic health coverage. Thus, a national program would reduce the financial pressures encountered by private firms that provide health insurance coverage while increasing the number of individuals protected. By lobbying for expansive health care protection for all individuals, unions could significantly enhance their image among older workers who find it difficult to obtain health care coverage before they become eligible for Medicare. In addition, labor officials would be seen as supporting an issue of real national importance.

Labor organizations should also lobby in favor of laws restricting intrusive drug testing. They could seek amendments to the Drug Free Workplace Act of 1988 that would restrict random testing to persons occupying safety-sensitive positions. Unions could also try to restrict individual tests to persons whose behavior has provided a reasonable suspicion of drug or alcohol abuse. While union efforts in this regard would acknowledge the serious nature of the drug problem and the need for employers to protect the safety of their workers and clientele, these legislative actions would also advance the dignity of innocent employees who are offended by needless drug testing.

Unions should also lobby for legislative provisions minimizing the possibility of false drug-use determinations. Many corporations presently rely exclusively on the less expensive and less accurate enzyme-multiplied immunoassay technique (EMIT). Companies that obtain positive EMIT results frequently reject applicants and even terminate current employees based on those tests. Firms obtaining positive EMIT results should be statutorily obliged to perform the more accurate gas chromatography/mass spectrometry (GC/MS) test before making adverse employment decisions with respect to the affected individuals. By working to lower the risk of “false positives,” unions can show employees that they have the power to protect against arbitrary and unfair treatment. Finally, labor organizations should encourage federal, state, and local governments to establish more alcohol and drug rehabilitation programs so that workers with substance abuse problems can also feel they are important to the labor movement.

One of the most significant benefits employees derive from union representation is the “just cause” limitation on discipline expressly or implicitly contained in almost all bargaining agreements. Without such restrictions and the accompanying grievance-arbitration enforcement procedures, most unorganized private-sector employees can be terminated at any time and for any reason not violative of a statutory prohibition.

Even though a number of state courts have created an exception which precludes employee discharges that violate clear and important public policies, the public policy limitation rarely benefits lower-level personnel. Approximately 150,000 private-sector employees are terminated each year under circumstances that would be found inappropriate by arbitrators enforcing “just cause” provisions.

To provide protection against such arbitrary treatment of workers, labor organizations should lobby for state and federal legislation protecting all private-sector employees against unjust discharge. Union leaders should not fear that the availability of these legislative protections would diminish employee enthusiasm for unions, because representative labor organizations would continue to provide valuable assistance to individuals forced to invoke their statutory rights.

These are just a few ways Union Leaders can create a favorable public impression of unions using Legislation. In Part 4 of How Labor Unions Can Survive: Creating a Favorable Public Perception we’ll look at how Labor organizations can enhance their public image using Education and Professional Development Programs.