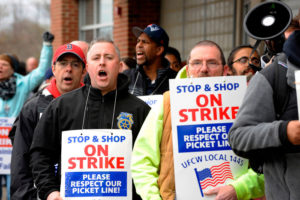 The PRO Act was introduced by Senator Murray and Representative Scott to give workers more bargaining power on the job.  The present law gives employers too much power and puts too many roadblocks in the way of workers trying to organize with their co-workers. That’s why the PRO Act is such an important piece of legislation.  It addresses several major problems with the current law and tries to give working people a fair shot when they try to join together with their coworkers to form a union and bargain for better wages, benefits, and conditions at their workplaces. Here’s how:

The PRO Act does not fix all the problems with our labor law, but it would address some fundamental problems and help make it more possible for workers to act on their federally-protected right to join together with their coworkers to bargain with their employer for improvements at their workplace. Research shows that workers want unions. There is a huge gap between the share of workers with union representation (11.9 percent) and the share of workers that would like to have a union and a voice on the job (48 percent). The PRO Act would take a major step forward in closing that gap.