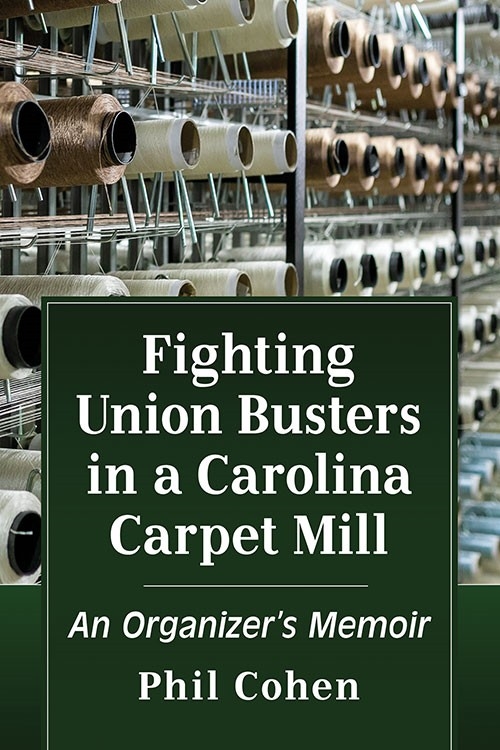 As fate would have it, I bumped into Phil when he posted on our Union Strong Blog.  The posting peaked my interest because I identified with Phil and the description of his background. We are both from NY, were both Chief Stewards, and both of us have the utmost respect for Union Organizers.   I will go on record saying that the Union Organizer’s job is the most difficult and the most crucial for our unions survival.   The Life Blood of Labor is Organizing.  I decided to give Phil a call and see if we could get him on our Blog, Newsletter and Social Media.  Phil accepted and I’m grateful that we can preview his new book.  I’m sure Union Officers, organizers, stewards and members will find it an interesting read about his trials and tribulations organizing in the South.  This is a must read for all who are affiliated with the Labor Movement!

Phil Cohen left home at sixteen, drove bootleg taxis in New York’s most dangerous neighborhoods and managed a skid-row hotel, before moving to North Carolina, where he served as chief steward while working at a bus garage.  In 1988 he joined the staff of ACTWU (now known as Workers United) and became one of the labor movement’s most celebrated experts at defeating professional union busters.  His work is responsible for landmark decisions by the National Labor Relations Board and OSHA.

Cohen’s critically acclaimed book, Fighting Union Busters in a Carolina Carpet Mill is an action-packed memoir, filled with colorful characters. It flows like a novel but tells a true story: an important read for all union activists.

In 2017, Workers United/SEIU called veteran organizer Phil Cohen out of retirement to investigate and expose an illegal union-busting plot by Mohawk Industries at its North Carolina carpet mill. His hard-hitting account chronicles the resulting labor dispute that rocked a Fortune 500 company. The organizer had to prove management was behind an unlawful decertification petition and forced workers to sign using strong-arm tactics. Though terrified of retaliation, witnesses gradually agreed to testify before federal agents. Mohawk retained a high-powered union-busting attorney who appealed directly to Trump-appointed heads of the National Labor Relations Board, while Right to Work Committee lawyers framed the issue as a test case to revoke laws protecting employee rights since 1935. The union’s only hope rested on presenting evidence too formidable for political bias to surmount.

​This memoir, infused with dry wit and insights into human nature, blows the lid off the nation’s union-busting epidemic, and thrusts readers into the tumultuous environment of a union hall in crisis.

plus a free CD of working class music.

This highly recommended book is available worldwide.  If you live outside the United States, save international shipping costs by buying locally.