Some Words of Wisdom About Filing A Grievance

All grievance procedures require going through a series of steps, with the contract itself identifying when each step is to take place, what precisely is to occur, and who may or must be involve at each stage of the process. Generally, the procedures get more formal as you go through each of the steps. Some grievances are resolved successfully at the earlier stages of the process, while others are not pursued past a certain point for a variety of reasons. Before we take a look at what the steps of the grievance procedure looks like, here are a few notes of caution. 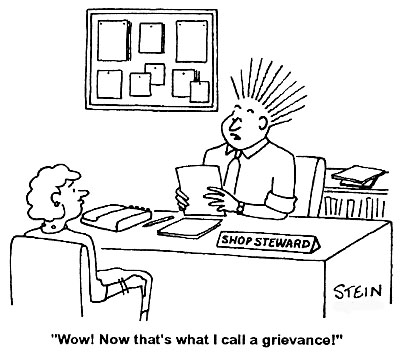 First, read through the grievance procedures contained in your collective bargaining agreement. Some of it may look like fairly technical stuff. You’ll probably find requirements as to the format that must be followed in writing up grievances the rules for who receives certain grievance filings, calculation of time frames for processing a grievance (such as the difference between “working days” and “calendar days”), etc. Don’t be intimidate by any of this; your Union Steward has received training in how to process grievances and has additional help to call on if needed. The best advice? Try not to wing it on your own! As soon as something happens that you thin might properly be challenged through the grievance procedure, consult your Steward.

Second, you are to be commended if you familiarize yourself with the provisions of your contract. But don’t automatically assume that, because of what looks like plain language in the contract, there is nothing that can be done to deal with a workplace problem that you have. Sometimes event he plain English in a contract doesn’t mean what it says (or, as the question was put by the Marx Brothers, “Who you gonna believe, me or your own eyes?”). For example, you may be able to count well enough for it to seem completely clear that too many days have gone by since a particular event occurred for you to meet the time frame set forth in the contract for initiating a grievance. But it’s worth at least consulting with your Steward, since you may learn that there are sometimes unwritten exceptions even to such seemingly clear-cut provisions, such as the grievance time clock stopping for holidays. Or you may learn that there are other mechanisms, besides the grievance procedure, that can be used to address the problem.

Third, don’t make the mistake of assuming that it would be useless to pursue a grievance because you think you’d never be able to get enough evidence to prove your case.

RELATED: 4 Not-So-Obvious Reasons Why Grievances Are Valuable in the Union Workplace

The fact is, both your contract and the law probably give your union the right to obtain vast quantities of documents and other information from your employer, if that information is needed to evaluate a potential or pending grievance. So if proof of your grievance over unfair treatment lies in determining how your employer has dealt with co-workers under circumstances similar to yours, your union will probably be able to get hold of the relevant personnel records.

Finally, before just about any workplace complaint is put into writing, an attempt should be made to work through the problem at the lowest level. Even if your contract’s grievance procedure doesn’t specifically call for an informal oral step to start out with, you and/or your Union Steward should talk to a supervisor in an attempt to clear up any misunderstandings or to resolve any disagreement. This is almost always a good idea, in part because once a complaint is committed to writing, parties’ positions tend to harden. And even if an informal attempt to address a problem does not in fact resolve it, it generally has the beneficial effect of clarifying what the problem is and how the parties may see it differently.

Even when keeping these items of caution in mind, sometimes informal attempts don’t work. And it’s time to put something in writing. Have you initiated or filed a grievance in your workplace? What words of caution do you have to add to our list? We want to hear from you! Sound off on the Union Built PC Facebook Page or on our Twitter or LinkedIn feeds. And don’t forget to subscribe to the monthly #UnionStrong email newsletter for articles like this one delivered straight to your inbox.