About Contract Campaigns Part I: Your Legal Rights

In today’s dysfunctional economic climate, straightforward bargaining frequently comes up empty. Employers come to the table with lengthy lists of takeaways and refuse to compromise. Claiming impasse at the earliest opportunity, they threaten to carry out their final offer or impose a lockout. 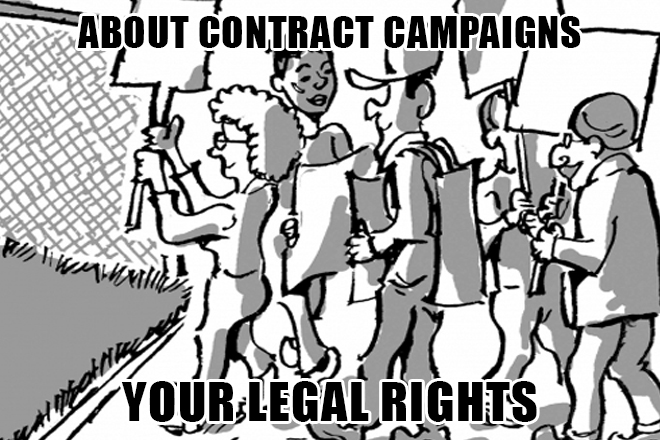 To cope with these realities many unions are turning to militant contract campaigns. Creative and aggressive tactics can demonstrate members’ solidarity, resolve, and willingness to act.

The union can reject bargaining ground rules that limit member involvement—for example, a rule that negotiations be kept secret. Because ground rules are not “mandatory” subjects of bargaining, an employer cannot make a particular procedure a condition for taking part in negotiations.

As bargaining proceeds, the union engages in a variety of pressure tactics such as buttons, shirts, solidarity days, rallies, and marches. Informational picketing may be conducted before and after shifts. Work-to-rule and boycott campaigns may also be instituted. Every member should be encouraged to participate.

Job actions—a “thousand cuts”—are the heart of a contract campaign. As one organizer put it: “The key is that you create a situation so that management, from the time they get up in the morning till the time they go to bed, they worry about what you’re doing. And if you’re doing a good job, they wake up with nightmares.”

Contract campaign activities help lay the groundwork for a strike by training workers in active techniques, building communications networks, and publicizing the dispute to the media and the community.

Buttons, stickers, and shirts. Workers have a firm legal right to use buttons, shirts, hats, and armbands to express their opinions on the job. Typical slogans: “No contract, no peace,” “Fight for a fair contract,” “No give-backs,” “Stop union busting.” A solidarity day—everyone wearing black or red union T-shirts—is protected by the NLRA unless it conflicts with an enforced dress code.

One NLRB case required a company to tolerate technicians wearing buttons inside customer premises saying, “Cut the CRAP, not my health care.” Another approved buttons saying, “Shut management down or 100,000 Teamsters will.”

An employer can bar insignia that is vulgar, obscene, encourages violence, disparages products, affects concentration, or harms relations with customers. But speculation is not enough: the employer must have tangible evidence that the insignia is having or will have the claimed effect.

In some circumstances, an employer can ban all forms of insignia (other than small or unobtrusive pins and buttons). The NLRB recognizes this exception in direct patient care areas and when a consistently enforced business plan mandates a particular public image, such as a neatly uniformed delivery driver.

Even in such cases, however, a ban on insignia is illegal if the employer discriminates. For example, a delivery company could not order a uniformed driver to remove a “Contract now!” button if it previously allowed political, religious, or social-cause insignia. Nor may an employer issue a rule that is overly broad; for example, a hospital rule banning insignia throughout the institution.

Handbills. Under NLRA rules, employees must be permitted to distribute union literature to other employees or the public in nonworking areas during nonworking time, unless the employer can demonstrate that prohibiting such activity is necessary to maintain productivity or to avoid undue disruption.

Company policies that forbid lawful handbilling or require prior permission are unlawful. Union flyers can express outrage and urge employees to stand together. Management may not order employees to stop, impose penalties, or call the police. Nor may it film the activity or record names.

Off-duty employees may place flyers on tables in cafeterias or break rooms and on automobile windshields in the company parking lot. Management may not remove the materials.

Absent special circumstances, off-duty employees must be permitted to hand out flyers to customers, clients, and the general public while on nonwork areas such as driveways and entrances. Flyers can ask patrons to tell the employer to bargain a fair contract. They can also ask patrons to take their business elsewhere. Management may not retaliate in any way.

Rallies. Daily or weekly mass rallies are standard fare in contract campaigns. Although the usual location is a public street or sidewalk, employees have a right to peacefully assemble on outside areas of the employer’s premises, such as parking lots or walkways. As long as rallies do not disrupt operations or traffic, management cannot film or write down names.

Typical signs: “Fighting for a fair contract,” “Honk if you’re with us.” Bullhorns, drums, and banners can enliven the activity. Family members can join. In the absence of violence or blocking, the employer may not film or take photographs.

Work-to-rule. In a “work-to-rule” action, employees scrupulously follow company policies, procedures, and standards, especially directives dealing with safety and hygiene. No one volunteers for extra duties, performs off the clock, or works at more than normal speed. Everyone takes full breaks.

The NLRB has not drawn a clear line between protected work-to-rule activity and an unprotected slowdown or “partial strike.” One decision, however, prohibited discipline against employees who deliberately left their personal tools at home.

Workers should be instructed to carry the campaign out unobtrusively, without open defiance. Direct orders from supervisors to perform tasks should be obeyed.

Boycott. Unions have a right to seek support from customers and the public. This includes a plea to boycott the employer’s products. Boycott activities can include:

Stockholders and directors. Campaigns can be directed against officers, stockholders, trustees, and directors. The union can send letters, make visits, distribute flyers, and picket homes. Because the NLRA prohibits secondary picketing, the union usually cannot picket a business owned or managed by a stockholder or a director. It can, however, use flyers and large stationary banners to ask patrons to take their business elsewhere.

What creative and assertive tactics can you add to this list to communicate your solidarity, resolve, and willingness to act? Sound off on the Union Built PC Facebook Page, or on our Twitter or LinkedIn feeds. And don’t forget to subscribe to our monthly #UNIONSTRONG email newsletter for articles like this delivered straight to your inbox. You may unsubscribe at any time.

RELATED: About Contract Campaigns Part II: Your Rights Under the NLRA Q&A