What those striking are now bravely confronting in Atlantic City should resonate deeply with American workers, their unions, and beyond

In Atlantic City workers at the Trump Taj Mahal casino hotel, members of UNITE HERE Local 54 wagered a struggle that should make it one of those crystallizing flashpoints that garner national attention and mobilize support from the entire labor movement, progressives, and working people at large.

Such flashpoints arise only occasionally in workers’ struggles for justice. In living memory, for example, Eastern Airlines, PATCO, Pittston, the Decatur wars, UPS, and most recently Verizon are among those that have attained that status.

Those flashpoints of national concern and mobilization occur when what particular groups of workers are fighting for and against connects with broader tendencies and concerns in workplaces and the society in general. Downsizing, speedup, outsourcing, privatization, capital flight, unsafe working conditions, profitable employers’ demands for concessions that imperil workers’ standard of living are all among conditions that have triggered those moments.

The striking Trump Taj Mahal workers are involved in precisely such a fundamental struggle now, one that should resonate far and wide among American workers and their unions.

Nearly 1,000 cooks, bartenders, housekeepers, cocktail servers and other workers there went on strike on July 1—the culmination of a twenty-month struggle to restore pay and benefit cuts that Donald Trump’s crony and notorious billionaire corporate raider Carl Icahn imposed on workers after obtaining permission to do so from a bankruptcy judge. Last year, it should be noted, Trump indicated that if elected he “would love to bring my friend Carl Icahn” to his administration as Treasury Secretary.

Following the bankruptcy ruling, Trump Taj Mahal workers lost health insurance, pensions, even severance pay. Workers have seen their average total compensation cut by more than a third. One striker with a chronic medical condition recently died alone at home without access to medical care, and there is no reason to believe that his case is unique. There are many other horror stories, including workers faced with losing their homes and apartments in addition to suffering other material and emotional hardships.

Why This Fight is Everybody’s Fight

The Trump Taj Mahal strike is an important moment for us all because these workers are on the frontline against forces that threaten us all and that lay bare what a Donald Trump presidency would have in store for millions of American workers. 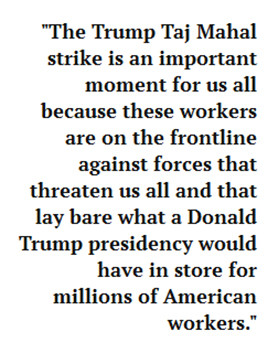 Both Trump, who built the Taj Mahal, and Icahn, who is the current owner, have taken millions from the property, driven it into bankruptcy, and left the workers holding the bag. Icahn, as Trump Taj Mahal’s sole debtholder between 2010 and 2014, took $350 million out of the business. Icahn has a long history—going back nearly thirty years to his takeover of TWA airlines—of bleeding companies of assets, gutting pensions and benefits, and then tossing aside the firms’ hollowed out carcasses. Manipulation of employer-friendly bankruptcy laws has also been a Trump specialty, one that he has used on several occasions to stiff contractors, going back to when he was the original “too big to fail” scamster at the beginning of the 1990s. Combined, Trump and Icahn have used the bankruptcy tool at the Taj Mahal multiple times.

Another reason we need to see the Trump Taj Mahal strike as all our fight—in addition to the outrageous injustice and hardship Icahn has perpetrated on these workers—is that this struggle in Atlantic City sheds light on some important mystifications that need to be clarified if we hope to turn the tide against the intensifying predatory assaults on American workers’ standard of living.

The Taj Mahal fight is a frontline battle in the systematic attacks on working people’s living standards in this country perpetrated by the likes of Donald Trump and Carl Icahn and their ideological affiliates Mike Pence, Scott Walker, Bruce Rauner, Pat McCrory, Paul Ryan and the Congressional Republicans, the education “reform” billionaires, the Koch brothers and ALEC, the many tentacles of the carceral state, all of whom are intent on destroying public goods and services, and good public jobs, if not the very idea of a public. To keep the focus on Icahn and Trump, however, what better poster boys could there be for the predatory “billionaire class”?

If the Trump Taj Mahal was permitted to operate on the terms Icahn imposed, workers, the union, and the broader community understand that the result would be a local race to the bottom, as other casino operators would argue that they have to compete with Icahn’s sweatshop model to remain viable. As by far the dominant industry in the city, the hospitality and gaming sector is directly linked to the economic health and well-being not only of casino workers but of the community at large. It is decent hospitality sector jobs that enable workers to buy houses and provide the backbone for the entire local economy.

And Atlantic City is not alone. Icahn’s attack on Taj Mahal workers is of a piece with broader right-wing attempts to drive down workers’ living standards everywhere. This is what is behind the systematic attacks on teachers’ unions and other public sector unions and efforts to destroy the national postal service. Partly it stems from a desire to eliminate any organized expressions of workers’ power, to clear the way to realizing the other objective: creation of a world in which we would have no alternative other than to accept work on whatever terms employers choose to offer it.

That, of course, would be employers’ utopia and workers’ hell.

The issues at the core of the Trump Taj Mahal strike reflect the concerns shared broadly by workers in this country. The struggle presents a clear window onto the danger within the false promises Trump seems to offer some, and the strikers and their union provide a clear, practical model of the sort of movement we will need to change this country’s political direction to center on the needs of working people.

Making this fight a national issue on the order of those earlier key labor flashpoints certainly seems like a no-brainer.