There’s the thing about Windows 10; you give up control. Control over updates and control over privacy, but Microsoft has finally admitted the latter is a serious problem and is taking action…

In a blog post Terry Myerson, Microsoft’s Executive Vice President of the Windows and Devices Group, said the words millions have been waiting to hear:

“Many of you have asked for more control over your data, a greater understanding of how data is collected, and the benefits this brings for a more personalized experience. Based on your feedback, we are launching two new experiences to help ensure you are in control of your privacy.” 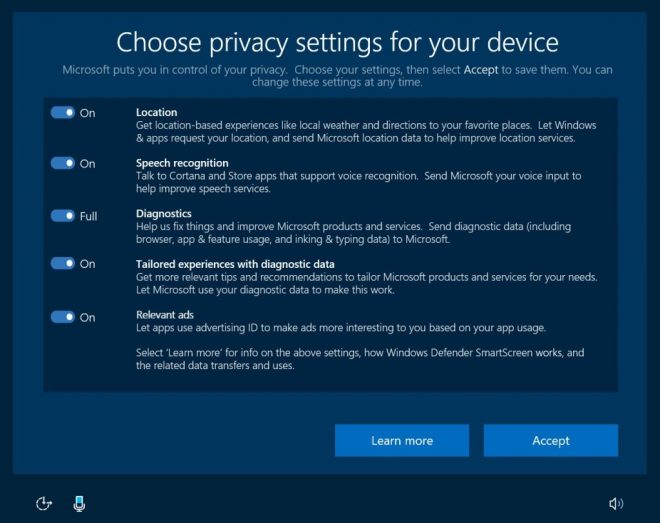 Arguably even more important, however, are two changes being made to the Windows 10 Creators Update when it is released in the next few months (and yes, it’s still a stupid name – ‘Windows 10.2’ would be fine!).

1. Overhauled Privacy Settings On Install/Update
Say goodbye to the rubbish ‘Express Settings’ screen on first install, with the Windows 10 Creators Update you’ll get clear but simply worded explanations and toggle switches. Users upgrading to the Creators Update will also be prompted to use after updating.

2. Simplified Diagnostic Data
More detail is needed here before judging the benefits but three collections levels are being cut down to just two: ‘Basic’ and ‘Full’. Basic will have only “data that is vital to the operation of Windows” which Microsoft defines are central to “keep Windows and apps secure, up-to-date, and running properly”.

Again you’ll be prompted to review your choice after installing the Creators Update.

Why So Long? And New Questions On The Horizon

On top of this, the Creators Update looks set to raise as many questions as it answers due to something it will add called ‘Dynamic Lock’. This uses your PC’s web camera to monitor when you are sat in front of it so it can be automatically locked when you step away. Users will be able to disable Dynamic Lock, which solves my concerns, but it is likely to start a whole new wave of conspiracy theories.

Furthermore, Microsoft must still address the issue of control over Windows 10 updates. The Creators Update introduces the option to delay the installation of non-security updates for up to 35 days, but only Windows 10 Professional, Education and Enterprise versions qualify.

This means Microsoft recognizes users’ need for control but the company continues to treat mainstream Windows 10 Home users as guinea pigs for the stability of new updates before they are provided to big business. That needs to stop and users of all versions deserve the right to have control over their PCs, should they want it.

Despite all this, it is clear Microsoft is making significant steps in the right direction with Windows 10. It just shouldn’t have taken so many obviously wrong ones in the first place.