Medicare for All vs. Private Insurance

I’m sure you’ve seen the first Democratic Candidates debate and how they are split on the question of MFA (Medicare for All) versus PI (Private Insurance). The Party divides between the Moderate and Progressive Candidates. I would like to weigh in on this and provide this primer to better understand the choices we will have to make in regards to our healthcare.

First, a definition of MFA and PI:

MFA – All candidates agreed that expanding access to health insurance and health care is a high priority. A handful of Democratic candidates in Wednesday’s debate called for a single-payer “Medicare for All” system that would eliminate private insurance. Single-payer healthcare is a healthcare system financed by taxes that covers the costs of essential healthcare for all residents, with costs covered by a single public system.

PI – Others advocate for more incremental changes, including Medicare buy-ins and shoring up and expanding the Affordable Care Act, commonly known as Obamacare, which covers about 20 million Americans. Private Insurance is available by purchasing directly from Medical Insurers or through Bargained Union Benefits (currently about 150 million Americans get coverage through their job).

Senator Bernie Sanders submitted his long-awaited Medicare for All Bill (SB 1804) to the U.S. Senate. He was joined by 16 cosponsors. The Bill would guarantee healthcare to every American from cradle to grave through an expanded and improved Medicare system and is the Senate companion to the House Bill HR 676, which currently has 119 co-sponsors.

Within hours of the release of the bill, a number of major national and regional unions –including APWU, ATU, BMWED/IBT, CSEA, IFPTE, NNU, NYSNA, UE, UMWA and UWUA–made public statements of support. Many more have indicated they will speak out after completing internal endorsement procedures. In October, delegates to the AFL-CIO convention in St. Louis passed “Resolution 6: Making Health Care for All a Reality.” The text puts the AFL-CIO on the record supporting Medicare for All and commits the federation to work with sponsors of single-payer legislation.

Smart, strategic unions such as the Vermont State Employees Association frame their fight for quality health care as part of a broader movement for health care for all. They’ve gone to their members to explain that, the “only way we can maintain our excellent health care is by working to expand it to every Vermonter.” And they’ve gone to the public with a promise that they will advocate for the right of “every Vermonter to have the same quality of health care that we have achieved.”

Wonder why some doctors grumble when a Medicare patient walks in the door? It’s likely because the government program typically pays only 80% of what private insurers do.

Medicare has the bad rap of being a big, bloated government program, but it’s not because it’s overpaying doctors. The differences can be stark. Private insurers allow an average of $1,226 for low-back disc surgery, while Medicare will only permit $654, for instance.

And the gap can grow wider depending on where the patient is. In New York, insurers allow $1,352 for a gall bladder removal, compared to $580 for Medicare. Some services are more comparable. For office visits by established patients, for instance, Medicare will allow 92% of what insurers do. Sometimes, however, the government does reimburse health care providers more. In Florida, for instance, a doctor doing a colonoscopy in his office will receive $395 for a Medicare patient, but only $342 for one covered by private insurance. 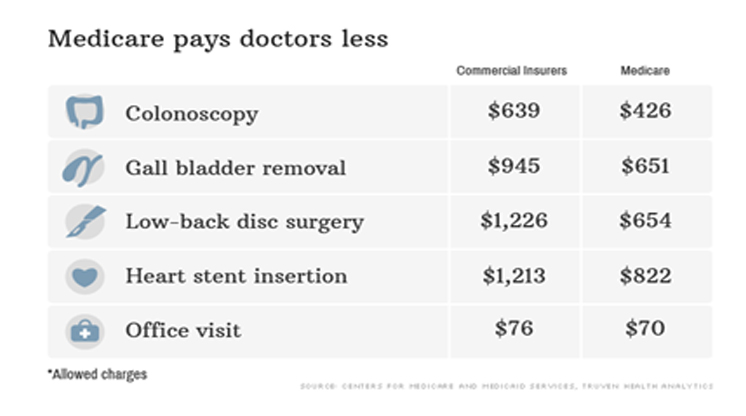 How does Medicare get away with paying less?

And doctors might be okay getting less per procedure because Medicare patients tend to need a lot of care. As a result, the total bill can add up. Nearly 4,000 doctors were paid more than $1 million from Medicare.

Private insurance whether purchased or received via Union benefits is still under the thumb of the insurance companies and the pharmaceutical companies who spend huge sums for lobbying to maintain their choke hold.

Making a decision as a Union Member with bargained medical benefits.

I was prompted to write this article after viewing both Democratic Debates. I’ve been a member of the Communications Workers of America for over 47 years, 25 years as a Chief Steward overseeing Picket Lines in Southern Manhattan. In 1989 we went on strike for 17 weeks to protect our Medical Benefits. NYNEX made their managers pay for Medical and they were hell bent to make the craft pay. It was a nasty and hard-won strike but because of our unity, our Medical benefits are intact to this day. You can see that I have a lot of skin in the game.

Seems that the devil is in the details. IF a Single Payer MFA system can be instituted that will provide equal or better benefits than our union sponsored plans I would be in favor of it. My fear is that the hype will overshadow the actual details. Perhaps the more moderate approach might be the safest, Medicare for all who want it, preserving the Private Insurance option.