“Today, with 20 minutes notice on one of the highest holy days for those of the Jewish faith, Verizon Wireless notified the Governor’s office that it would be closing two call centers in New York as part of a nationwide consolidation plan. This is an egregious example of corporate abuse – among the worst we have witnessed during the six years of this administration. Verizon’s negligence is astounding and as a result, hard-working New Yorkers will lose their jobs.

“New York is invested in our workforce and we remain committed to keeping and creating well-paying jobs across the state. Governor Cuomo has directed the New York State Department of Labor to dispatch its Rapid Response team to assist employees during their time of transition, and we will work to reverse the impact of Verizon’s reckless decision. In this state, we will continue to stand up to those who put profit ahead of people.” 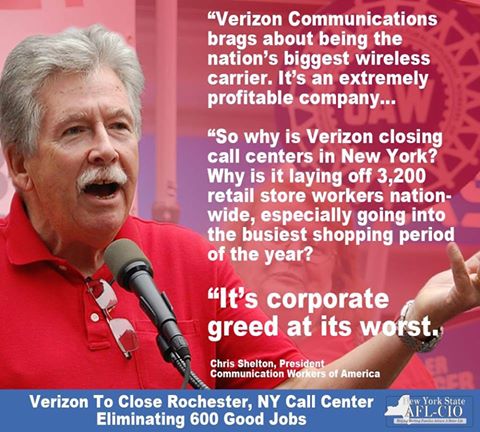 Statement from Chris Shelton, President of the Communications Workers of America:

“So why is Verizon closing call centers in New York? Why is it laying off 3,200 retail store workers nationwide, especially going into the busiest shopping period of the year?

“It’s corporate greed at its worst. Does this mean more jobs and more customer service problems will be shipped to Verizon overseas operations in the Philippines and other countries?

“CWA has been working with Verizon Wireless workers at call centers and retail stores, to help workers get the union voice and representation they want and so clearly need. In fact, workers at VZW stores in Brooklyn, N.Y., and Everett, Mass., just won a first contract just this year. We will keep up the fight against ‘very greedy’ Verizon.”

For media inquiries, call CWA Communications at 202-434-1168, or email Candice Johnson. To read about CWA Members, Leadership or Industries, visit the Communications Workers of America website.