How Hackers Can Ruin Your Summer Vacation

From airports to hotels to that cute café you found, it just takes one cybersecurity slipup to turn your holiday into a nightmare.

It was the Summer Olympics in 1996 in Atlanta. Ken Spinner, then a systems consultant — and tourist in the city — lost his credit card information.

But this was more than two decades ago, so it happened the old-fashioned way: a mugging at the ATM.

Today, hackers can steal your banking and credit card information without leaving their couches. That’s particularly worrisome if you’re taking off for the summer. It’s peak vacation time, but it’s also the perfect season for hackers.

FREE DOWNLOAD: The Growing Threat of Ransomware and How to Stay Safe

It’s no different from why thieves and pickpockets target tourists on vacation: They’re in an unfamiliar setting, they have their guard down and, more importantly, they’ve got money.

It’s like why people rob banks. That’s where the money is. When people go on vacation they use airports and stay at resorts.

In every one of those breaches, thieves stole credit card information from the hotels, leaving thousands of unsuspecting customers open to getting robbed. It’s not just your money these hotels are losing; addresses, phone numbers, names, and check-in and check-out times are all fair game. 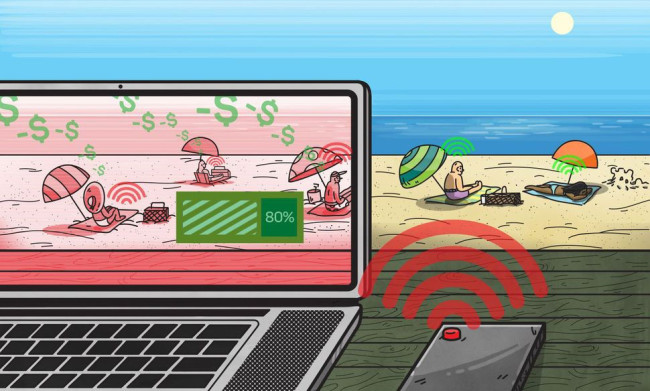 Because many hotels are chains, one breached location means hackers can break into the entire network for the mother lode of information. The stolen information can be sold online for up to $50 per account.

The majority of incidents start from a single employee at a hotel getting phished.

So even if your family takes all the precautions to keep your credit card information safe, and the hotel you stay at is safe, it could be a part of a compromised network. You could do nothing wrong and still lose.

But the breaches don’t stop at hotels. Airports, coffee shops, beaches — any place with open Wi-Fi, really — should have you on the lookout.

Don’t fret too much, though. There are still ways to keep yourself safe.

When you’re traveling, and don’t have your precious home or office internet access, be wary of any public Wi-Fi network you jump on. You might be setting yourself up for a man-in-the-middle attack.

That’s when a thief will set up a bogus hotspot, made to look exactly like the public Wi-Fi you wanted to get on, like the hotel lobby’s or the airport’s. When you sign on, you’re actually sending all your data to the hacker, without any warnings that you’re being compromised in plain sight.

It happens so frequently that in Singapore more people are afraid of using public Wi-Fi than public toilets.

Plus, people typically have their guard down when they’re on vacation. They won’t consider what the implications are if they go to a rogue Wi-Fi hotspot.

Without question, when on any public WiFi hotspot, avoid banking websites and online shopping. Anywhere you are entering your personal financial information. Always use an encrypted connection.

RELATED: Protect Your Sensitive Data from Cyber Criminals with the Union Built Cloud

In some more extreme cases, consider going “electronically naked.” That means leaving every piece of technology at home: your phone, your laptop, your tablet, your iPad – everything! (It’s hard to conceive but read on.)

There are entire retreats dedicated to detoxing from digital life, so the idea of going on vacation without any technology isn’t as farfetched as you may think. Cyber Security experts most often go “electronically naked” when visiting China or Russia. This is where the majority of hackers emanate from.

Enigma Software took a look at cities in the US, Canada and Europe that have the highest malware infection rates. So if you’re heading to any of these cities, you may want to consider going electronically naked:

Has your personal financial data been breached? On vacation or otherwise? What happened? What was the resolution process like? We want to hear from you! Sound off in Comments, on the Union Built PC Facebook Page, or on our Twitter or LinkedIn Feeds.

And don’t forget to subscribe to our monthly #UnionStrong email newsletter. You may unsubscribe at any time.