Ensuring Transparency in Reporting For Employer and Labor Relations: The “Persuader Rule”

You’ve probably watched one before.

An anti-union video so painfully corny, you probably had to turn it off after a few seconds.

Anti-union videos — like this one from Target — fliers and other materials are the bread and butter of consulting firms who specialize in “union avoidance.” A nefarious industry that steps in for employers and attempts to squelch working people’s right to a union voice on the job.

Thanks to a new transparency rule released by the Department of Labor called the “persuader rule.” 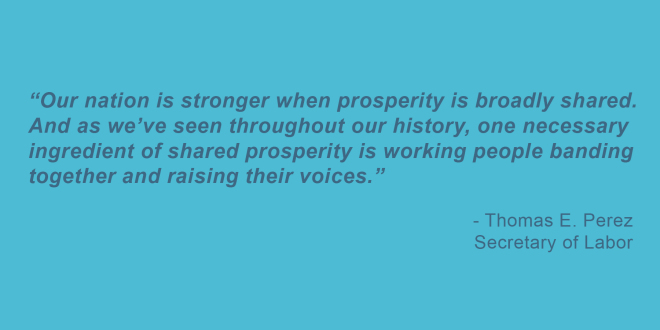 Some employers hire labor relations consultants to develop and implement their message in union organizing campaigns. Workers need to understand the source of the views, materials, and policies that are being used to influence their decisions so they can make the best, informed decisions about whether or not to be represented by a union or support its collective bargaining positions. That’s where the Persuader Final Rule comes in, realigning the Department’s regulations with the text of a law passed by Congress, the Labor-Management Reporting and Disclosure Act of 1959 (LMRDA).

This Final Rule requires that employers and the consultants they hire file reports not only for direct persuader activities – consultants talking to workers – but also for indirect persuader activities – consultants scripting what managers and supervisors say to workers. Workers often don’t know that their employer hired a consultant to manage its message in union organizing campaigns, including by scripting speeches by managers, talking points, letters, and other documents. Consultants may also direct supervisors to express specific viewpoints that don’t match those supervisors’ actual views as individuals – something workers may find relevant in assessing the information they receive from their supervisors.

AFL-CIO President Richard Trumka weighed in on the new rule:

“It takes great courage for working people to come together to form a union. Working men and women deserve to know who their employer is hiring and exactly how much they are spending to discourage workers from forming a union.”

Ultimately, employees deserve to know whether third-party union busters are being employed to influence their decision about forming a union with their co-workers and there needs to be assurance that employees are given more information about the source of the campaign material that helps them make a more informed choice in exercising their rights. Thanks to the “Persuader Rule” American workers now have that transparency.