Cedar Rapids, Iowa is at the heart of the Interstate 380 Cedar Rapids/Iowa City Technology Corridor, and is the second largest city in the state of Iowa. Painter Grant Wood and actor Ashton Kutcher came from here. It’s filled with people who have a solid work ethic, and they do not let hardship keep them down for long.

It was also the site of devastating flooding by the river the city was named after, the Cedar River, in the Spring of 2008. “The 500 year flood” is now what everyone calls it. In its entire history, water damage like this has never been known here.

One of our clients, the Cedar Rapids Electrical JATC (Joint Apprenticeship Training Center), had us install a Net Integrator Mark I server in October of 2007, along with some other equipment such as a laptop classroom and wireless access points. They’re pleased with how it works for them, and the Director, Mike Carson, has come to appreciate all of what it can do. 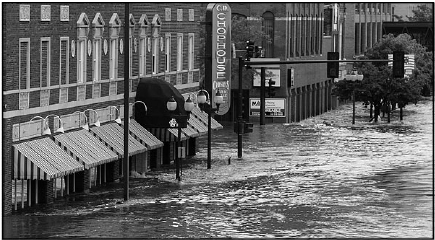 We talked to Mike while we watched the news in shock as towns upstream from Cedar Rapids, , IA, got hit by the rising waters. It was heading South, and two days before the crest arrived and inundated the city, we decided to take action to protect our client.

We established a VPN connection on Sunday night, and began copying critical data such as financial records, documents, and databases. Because of the way the server works, we could quickly pinpoint all of what we wanted and simply drag and drop it onto our servers here in Michigan. The only limitation on speed was the Internet connection itself.

The critical data was copied by Monday afternoon, and at that point, we started copying some secondary files just in case the worst case scenario happened.

At about 10pm that night, the power went out all over Cedar Rapids. We lost the connection, and it didn’t come back up until the river had crested, and the town had started its recovery.

But we had the critical data files. We were preparing to load them onto a new server so that we could get the JATC back up and running immediately, but then we received a call from Mike, “All is well. The high ground saved us! But boy, did our downtown get it bad. I’ve never seen anything like this.”

We can perform tasks such as this kind of emergency backup remotely, no matter where the client is located. And while they have 3 backup hard disks onsite, and one is always kept in the fireproof safe, those have no value for recovery purposes if they’re under water.

There’s an old Johnny Cash song where the little boy is asking, “How high’s the water, Mama?” and she responds, “It’s four feet high and rising.”

With the technology we have in place at many training centers just like this one around the country, we can help our clients recover no matter how high the water rises.

We talked to Mike again a few weeks later, wondering if the town would ever bounce back. He responded, “We’ve got great people with strong hearts and minds here in Cedar Rapids, and we’ll rebuild, better than ever.”